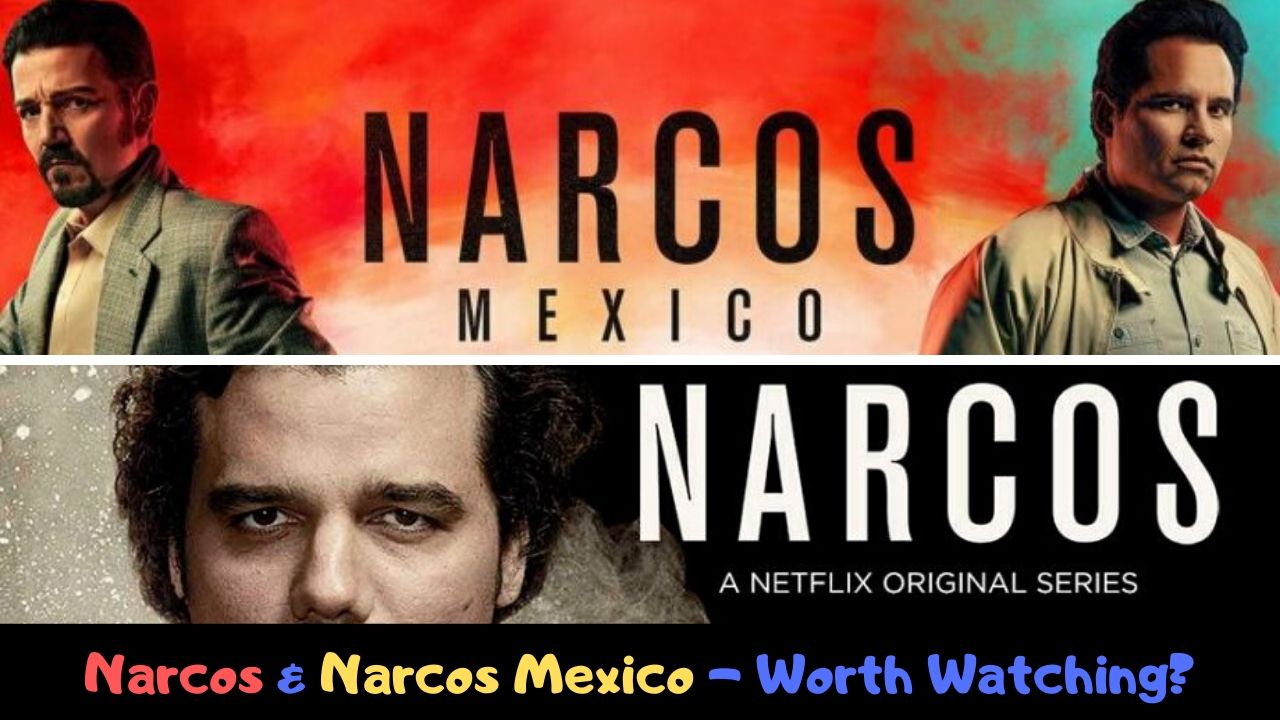 Narcos & Narcos Mexico are two super popular shows on Netflix, but what are they about and more importantly are they worth watching? In this article I’ll give you a brief review of Narcos and Narcos Mexico as well as updated release date info and how to watch them.

Warning – both of these series are crime-related dramas that have a RATING is “TV-MA” so they are obviously adult-only shows.

About Narcos on Netflix

What’s Narcos About? Released in 2015, Narcos is a Netflix Original Drama that “chronicles the rise of the cocaine trade in Colombia and the gripping real-life stories of drug kingpins of the late ’80s in this raw, gritty original series. Also detailed are the actions taken by law enforcement as they battle in the war on drugs, targeting notorious and powerful figures that include drug lord Pablo Escobar. As efforts are made to control cocaine, one of the world’s most valuable commodities, the many entities involved — legal, political, police, military and civilian — find themselves in conflict.”

Who are the main stars of Narcos? Wagner Moura, Pedro Pascal, Boyd Holbrook

How many seasons of Narcos? 3 Seasons (Narcos is a complete series – 30 episodes in 3 seasons).

How to watch Narcos on Netflix?

About Narcos Mexico on Netflix

What’s Narcos Mexico about? After the popularity of the origional Narcos, Netflix released Narcos Mexico in 2018. Narcos Mexico is therefore a continuation of the Narcos universe and “explores the origins of the modern drug war by going back to its roots, starting at a time when the Mexican trafficking world was a loose, disorganized confederation of independent growers and dealers. It’s the 1980s, and Felix Gallardo takes the helm of the Guadalajara Cartel, unifying traffickers to build an empire. As DEA agent Kiki Camarena moves his wife and young son from California to Guadalajara to take on a new post, he learns his assignment is more challenging than he imagined. A tragic chain of events unfolds as Camarena gains intelligence on Gallardo and becomes more entangled in the mission.”

How Many Seasons of Narcos Mexico? 2 seasons (as of February 2020)

How Watch Narcos Mexico on Netflix?

If you like crime dramas (particularly of the cartel/gang-related motif) and you are ok with the inherent violence of these shows, then you’ll undoubtedly like BOTH Narcos and Narcos Mexico.

I give both shows a THUMBS UP and classify them both as BINGE-worthy shows.

One of the interesting things about both shows is that the creators attempt to let you ‘walk a mile’ in the shoes of the gangsters and you may sometimes find yourself caring for the criminals. (To be clear I’m NOT suggesting you are rooting for them or condoning their actions so please don’t read into this statement, I’m merely applauding the directors for their ability to help seemingly you get inside the minds of the villains and perhaps understand their motives). I believe this is especially true with the original Narcos series and the Pablo Escobar character.

Have YOU seen Narcos or Narcos Mexico? If so what’s YOUR take?

If you enjoy reading That Helpful Dad’s articles, you may also like…