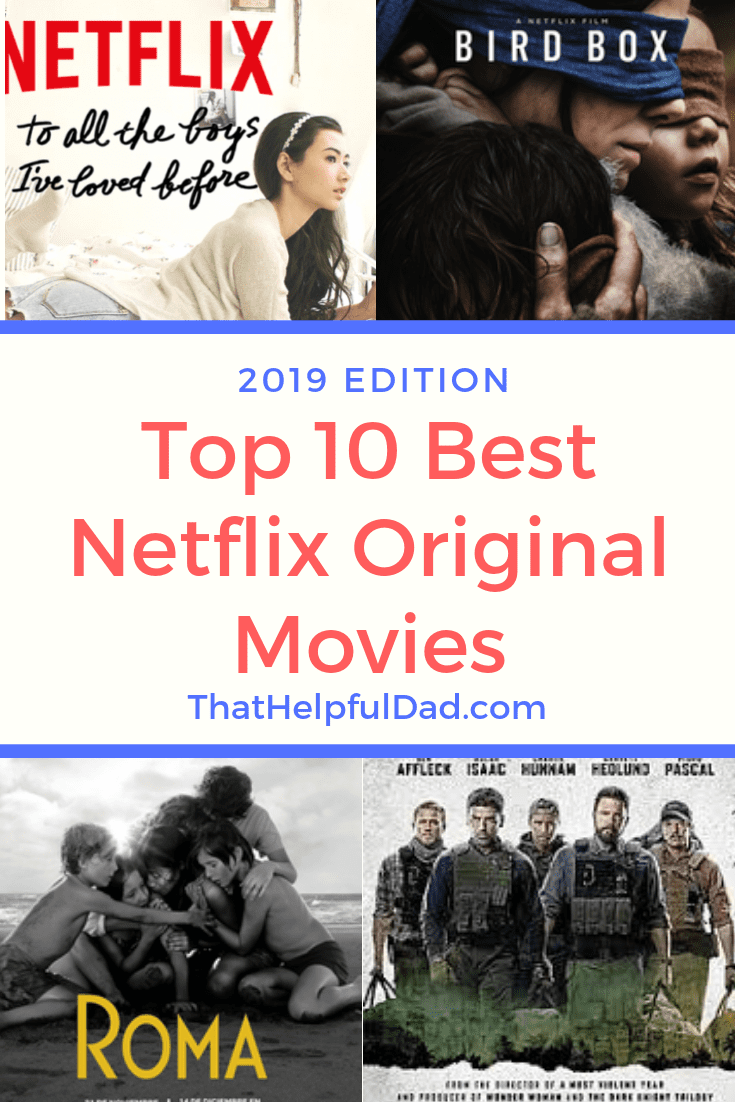 Best Netflix Original Movies – if you’re looking for ideas on what to watch next on Netflix then this article and video can help you.

I’ll tell you my Top 10 recommendations for the Top 10 Best “Netflix ORIGINAL” MOVIES you can to watch on Netflix right now. BONUS – scroll down and you’ll also get my Top 10 Best Netflix Original SERIES too.

Whatever your pleasure, this article will help you quickly decide what to watch on Netflix so you can save time. With that in mind I recommend you get your popcorn ready as we review my recommendations for…

The Best Netflix Original MOVIES for 2019

BTW, have you ever had trouble finding movies to watch on Netflix? If so have no fear because in the video we’ll also show you how to navigate Netflix to find the “Netflix Original” movies I’m talking about.

Mike’s Take: Many people still don’t know that this Academy Award winner for Best Picture is a “Netflix Original” Movie. That speaks to the power and quality of Netflix in the movie space. Roma itself is a tear-jerking emotional Drama set in the 1970’s – it’s a serious and powerful film and if you are in the mood for a movie of this type, Roma should be on your must-see list.

Roma Official Description: “Cleo is one of two domestic workers who help Antonio and Sofía take care of their four children in 1970s Mexico City. Complications soon arise when Antonio suddenly runs away with his mistress and Cleo finds out that she’s pregnant. When Sofía decides to take the kids on vacation, she invites Cleo for a much-needed getaway to clear her mind and bond with the family.” Watch it on Netflix

Mike’s Take: This social media hit is a Thriller starring Sandra Bullock trying to protect her family from an ominous presence that drives people to suicide. While it’s far from best picture materials, it’s a fun popcorn movie you’ll enjoy talking about with friends – just don’t forget your blindfold!

Bird Box Official Description: “When a mysterious force decimates the population, only one thing is certain — if you see it, you die. The survivors must now avoid coming face to face with an entity that takes the form of their worst fears. Searching for hope and a new beginning, a woman and her children embark on a dangerous journey through the woods and down a river to find the one place that may offer sanctuary. To make it, they’ll have to cover their eyes from the evil that chases them — and complete the trip blindfolded.” Watch it on Netflix

Mike’s take: This is another popcorn movie that tells that tale of Ex-military US Special Forces who seek to rob a drug lord and keep the money – unfortunately things don’t go quite as planned. It stars Ben Affleck, Charley Hannum, and others you’ll recognize from your favorite shows.

Triple Frontier Official Description: “Former Special Forces operatives reunite to plan a heist in a sparsely populated multi-border zone of South America. For the first time in their prestigious careers, these unsung heroes undertake this dangerous mission for themselves instead of the country. But when events take an unexpected turn and threaten to spiral out of control, their skills, their loyalties, and their morals are pushed to a breaking point in an epic battle for survival.” Watch it on Netflix

Mike’s take: This is an interesting movie. On the surface it’s a 1980’s period piece in the sci-fi category about vid game creator but it has the unique twist is that this movie features INTERACTIVE participation by YOU.

Mike’s Tip: Black Mirror Bandersnatch is like the old “Choose Your Own Adventure” books from our youth, at various points in the film you’ll be given a decision point that requires you to choose what the main character should do. YOUR decisions then change the movie’s outcome and that means that you can actually watch it multiple times and end up with a different movie each time!

Black Mirror Bandersnatch Official Description: “A young programmer starts to question reality when he adapts a mad writer’s fantasy novel into a video game.” Watch it on Netflix

Mike’s Take: a disaster turns the US into war-zone arena and Hunger Games star Theo James must partner with his soon-to-be father in law Forrest Whitaker to reach James’ pregnant fiancee. Another popcorn, check-your critic’s-hat-at-the-door-and-just-enjoy type of movie.

How It Ends Official Description: “In the midst of an apocalypse, a man struggles to reach his pregnant wife, who is thousands of miles away.” Watch it on Netflix

Mike’s Take: You know the story of Bonny & Clyde but what about the tale of the Texas Rangers who were tracking them? Pairing Kevin Costner and Woody Harrelson, this movie is based on the real life story of those rangers and is a 2019 new release on Netflix.

6. Mowgli – Legend of the Jungle

Mike’s take: This story has been told many times, but this version is worth watching as well because the fantastic computer graphics turn this remake of the Rudyard Kipling tale into a winner. Just be sure you watch it WITH your kids because it’s intense in some parts.

Mowgli Legend of the Jungle Official Description: “Human child Mowgli is raised by a wolf pack in the jungles of India. As he learns the often harsh rules of the jungle, under the tutelage of a bear named Baloo and a panther named Bagheera, Mowgli becomes accepted by the animals of the jungle as one of their own, but the fearsome tiger Shere Khan doesn’t take a liking to him. But there may be greater dangers lurking in the jungle, as Mowgli comes face to face with his human origins.” Watch it on Netflix

Mike’s Take: This is a twist on the buddy cop movie theme as Will Smith partners with an “ORC” and battles LA gangs and turf wars while learning valuable lessons about racism, etc. Is it Will Smith’s best movie? Obviously not, but it’s certainly an interesting one and fans of sci-fi will enjoy it.

Bright Official Description: “In an alternate present day, humans, orcs, elves and fairies have been coexisting since the beginning of time. Two police officers, one a human, the other an orc, embark on a routine night patrol that will alter the future of their world as they know it. Battling both their own personal differences as well as an onslaught of enemies, they must work together to protect a young female elf and a thought-to-be-forgotten relic, which, in the wrong hands, could destroy everything.” Watch it on Netflix﻿

Mike’s take: This is another social media driven hit and numerous streaming platforms have a version of this tale in 2019. This is the documentary about ‘the party that never was’ – the story of a ponzi scheme that robbed a bunch of rich kids from having a good time – now who wouldn’t want to see that? 🙂

Frye Official Description: “The history of the Fyre Music Festival, from its creation through its unraveling.” Watch it on Netflix

9. To All the Boys I’ve Loved Before

Mike’s Take: The bestselling book is a movie about a high school girl who wrote 5 love letters but never intended for them to get out – they did and now she deals with the consequences! It’s funny, heartfelt, and a great coming of age story. It also may well be the best “Netflix Original” movie on Netflix right now!

To All the Boys I’ve Loved Before Official Description: “When her secret love letters somehow get mailed to each of her five crushes, Lara Jean finds her quiet high school existence turned upside down.” Watch it on Netflix

Mike’s Take: This may not be the best film ever made and it’s certainly not family-friendly, but if you grew up in the 80’s you’ll probably enjoy this film in spite of yourself. It’s the story of the 1980’s rock band MOTLEY CRUE – as told from the POV of drummer Nikki Sixx.

The Dirt Official Description: “In this unflinching biopic based on Mötley Crüe’s best-selling book, four LA misfits navigate the monster highs and savage lows of music superstardom.” Watch it on Netflix

Popular Articles from our site