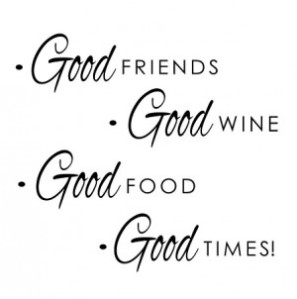 We’ve been talking recently about trying to make a concerted effort to live in the present moment and to take time to enjoy our lives while we are living them. This past weekend, I had the chance to go to dinner at a friend’s house, little knowing that the meal would end up being one of the Top 5 Best Dinners I’d ever had in my life!

The meal itself was not unique – steak, potatoes, salad, some veggies, and a few drinks – the same types of things we’ve all had countless times over. So why was this meal so much better? Because of the PASSION of the host. I knew going in that my friend Ben was a bit of a connoisseur of fine food and wine, so I was already expecting a nice meal. He told us in advance that he was buying some special steaks with premium cuts and numerous types of fine wines, so this added to the appeal. However, I tempered my expectations because this was after all ‘just’ a dinner at a friend’s house, not a 5-star restaurant, and I knew Ben wasn’t a professional chef so going in I was simply expecting a nice evening with good company.

What I didn’t know is that, when it comes to food, drink, and friends, Ben lives by the very code we’ve been talking about lately – he takes the time to “Be Present” and he puts his heart and soul into creating special moments! Anyone can buy high end ingredients, but if you don’t take the time to learn the craft of what to do with them, you’ll end up with a meal that is most likely good, but not great. What made this occasion so special was the passion Ben put into it – every dish had something special about it – made so because of him. There were the shitake mushrooms and Chinese broccoli which he served with abalone sauce, the various bottles of wine which each had a personal story attached to them as to why their were special, a honey pepper spread for crackers for which Ben freshly-smoked some cherry sea salt, and of those course fine cuts of meat – in the case of the steaks, Ben had procured 3

different dry-aged cuts (a bone-in filet, a bone-in ribeye, and even a little seen 50-day aged tomahawk cut), he’d seasoned the meat with just some salt and pepper, and then cooked them all on a simple charcoal grille. Now I could have taken those same cuts and put them on the high end grille in my outdoor kitchen that probably costs 30-40 times the simple Weber Kettle which Ben used and I guarantee you my steaks would have paled in comparison. Don’t get me wrong, I love to cook and I’m usually pretty proud of the steaks I can produce, but I’d never made anything like Ben’s because I’d never cooked with the passion that he did! Furthermore, I’ve eaten at more high-end steakhouses than I can remember, I’ve had all different kinds of wet and dry aged cuts, and while I’ve had some truly spectacular meals in my day, I can honestly say that I’ve never had a steak as good as the ones Ben served this weekend – perhaps the best way I can explain it is that the steaks were so good, pretty much everybody at the table even at the FAT – not just a little bit of the fat, but ALL of it. I realize that may sound gross (it certainly isn’t healthy) but it was simply so good that it was like eating steak butter. And it all goes back to the effort Ben put into everything. In addition, not only did Ben cook our meal, but he also served it all as well – explaining that, to him, his friends are his family and it was important to him to make sure we felt at home and could focus our sole attention on the food and the company. In fact, he specifically said he wanted us to BE PRESENT for the meal (the very life lesson I’ve been writing about on this blog recently!). After dinner, we spent relaxing in lounge chairs that surrounded his homemade fire pit, and chatting with he and his fiancé, and by the time it was over, somehow 6 hours had flown by!

It was humbling to witness someone who put forth so much effort to make his friends feel special, not because he owed us anything, but just because he wanted us to FEEL ALIVE. It was inspiring to see what’s possible, when you live with passion. And it was amazing to be able to live in the moment for a truly special meal with good friends. Thank you, Ben and Darlene.

This experience brought to life so many of the life lessons I’ve been writing about on this blog. Here are a few…

NOW is the time to ENJOY LIFE

Solomon Commands you to Eat, Drink, and Be Merry

Don’t Just Get By, LIVE WITH PASSION

And, Choose Happiness Over Money.

2 thoughts on “Turning the Simple into the Extraordinary”