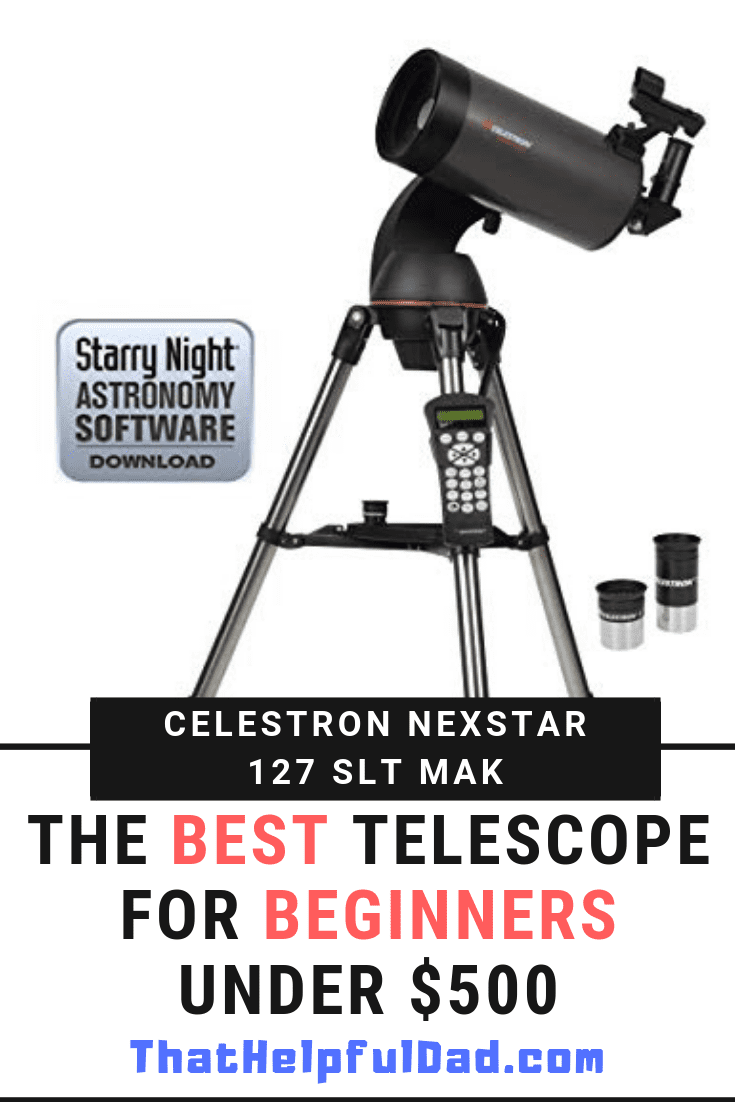 I’ve always been fascinated with astronomy, and I remember when my dad got us a telescope when I was a kid, so when my oldest son recently turned 10 and expressed an interest in the stars and planets, my wife and I knew it was high time we picked up a telescope for our family too. If you follow me on this site or YouTube, you know I always do a LOT of research before making a purchase. Such was the case here too. I reviewed tons of websites and telescope models before deciding on the one I’m recommending here. In this article I share with you why I purchased the Celestron NexStar 127SLT Mak Computerized Telescope, some of the other scopes I considered which are also good, and some of the sites I used for my research.

I. About Celestron Telescopes

If you are new to telescopes, you may not be familiar with the Celestron brand, however ask any of your friends or do even a bit of research and you’ll hear over and over again how great Celestron scopes are – especially for beginners with kids, families, or other newbies. The company has been in business since the 1960’s and they have made scores of highly rated telescopes that can help you see the moon, planets, stars, galaxies, and other deep space objects. Do a quick search on Amazon and you’ll see a large number of Celestron telescopes with 4-star ratings with 100’s of reviews – that means you can buy this brand with confidence.

For my situation, in addition to looking at reviews about Celestron on Google, Amazon and various other websites (see more below), the brand was also highly recommended to me by a friend who has purchased numerous telescopes over the years. Given my friend’s astronomy experience, he was a reputable resource for me and so when he specifically recommended the Celestron brand to me for my situation (i.e. as the best telescope brand for beginners with kids and families), I knew I had to strongly consider it. I am recommending that YOU do the same.

Here are the basics about the Celestron NexStar 127SLT Mak Telescope

III. Why I consider the Celestron NexStar 127SLT Mak the “Best” Telescope for Beginners

There are 4 things I factors I used in my decision making process to help me determine what was the best telescope for beginners with kids and families like my own:

Let’s review each of these.

We already reviewed the long history of Celestron and the fact that the brand is recommended by telescope aficionados like my friend and others (see the external web links in Section V below) – this gave me confidence in the brand’s reputation. The fact that Celestron has so many telescopes that are highly rated and recommended by others gave me confidence in the quality.

Perhaps the only knock on the Celestron NexStar 127SLT Mak is that, like other computerized telescopes, it is NOT as easy to set up or use as a manual (i.e. non-powered) telescope. If you are not familiar with what a ‘computerized’ telescope is (and I wasn’t before I started the buying process), then I suggest you read a bit about it so you can understand why you might want one — for an excellent discussion on the advantages and disadvantages of computerized telescopes see this article by OpticsPlanet.

The key advantages that most appealed to me about the 127 SLT Mak were:

3-Ability to Grow as our interest expands

Look, I get it, $400 or so for a telescope for beginners isn’t anything to sneeze at. It’s a decent amount of money for a telescope for kids and families as your first scope. The fact is there are plenty of other scopes available for less money. If $400 isn’t in the budget then you should consider these three highly rated scopes that are all usually on sale for under $200:

All three of these are great options for families looking for their first telescope and if you’re on a budget they’d make an excellent choice to as entry-level scopes.

That said, if you can afford to spend just a bit more, you’ll be able to get something like the Celestron NexStar 127SLT Mak that we purchased and not only will this serve as a great beginner telescope, but it will also grow with you over time. After you learn how to use the computerized scope you’ll realize there is just so much more you can do with it than you could with a manual scope.

If money was no issue, perhaps I would have purchased the Celestron NexStar 8 SE Telescope or one of the Orion Dobsonian scopes you read about on the astronomy forums, but those aren’t really realistic or prudent options for my family of beginner astronomers. I determined that I wanted to spend under $500 and I wanted a scope that would provide the best price to value in that price range. For us it was the Celestron NexStar 127SLT Mak – this telescope gave us nearly all of the advantages of the higher cost Celestron “SE” models AND it checked every box on the list of features that were important to us (as we discussed in the “Ease of Use” section above). Therefore, in the end, the choice wasn’t all that hard. We bought the Celestron NexStar 127SLT Mak from Amazon and haven’t looked back.

You can check the latest price and see it on Amazon here.

IV. Other Scopes I Strongly Considered

In the interest of fair balance, I think it’s also important to note that, after doing all my research and before making my final purchase decision, I actually ended up with 2 other scopes besides the Celestron NexStar 127SLT Mak that I strongly considered Those scopes were:

Both of these are fine scopes, but they just didn’t check as many boxes for us as the 127SLT Mak. After going through all the forums and talking with folks, I felt like Orions were better at higher price points (around $1k) but that was a bit too high for our ‘beginner’ scope. As for the Celestron 130SLT it’s a Newtonian scope and although there are certainly advantages to that setup for certain types of deep space viewing, we decided we wanted the more compact Mak-Cassagrain version that would potentially be better for viewing the moon and planets.

All this being said, I do believe the Orion StarBlast 6 or the Celestron SLT130 would make good telescope for kids and families depending on YOUR needs.

V. Websites I used for my research

If you follow my site, you know my goal is to help save you time when you’re trying to solve a problem or make a buying decision. One of the ways I do that is by providing you with links to some of the sites I used to conduct my research. In this case, I’d recommend all of the following sites:

You’ll be delighted with this purchase. Please be sure to let us know how you make out and drop us a line in the comments below.

What to Read Next?