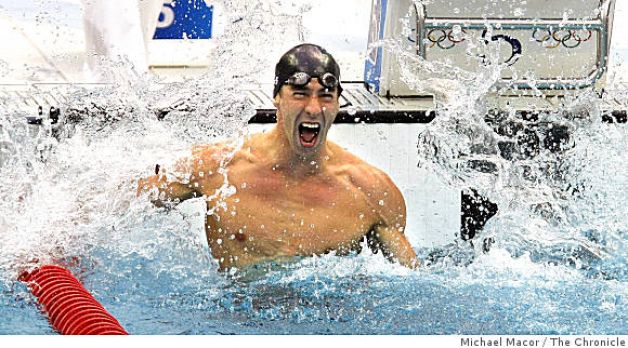 Life Lesson #21: The Difference Between Victory and Defeat is So Small.

Today’s life lesson was inspired by swimmer Michael Phelps who said “If you want to be the best, you have to do things that other people aren’t willing to do” and for other reasons that will soon become obvious to you…

But First Some Cool Science

Do you know the temperature it takes to boil water?

Do you know what happens if you only heat the water to 211 degrees F (or 98 degrees C)?

The water doesn’t boil, it’s still just water.1 But crank up the heat just 1 degree more and the water boils – not only will that boiling water but it also becomes steam (a gas) and that steam equals POWER – the power to drive a giant locomotive, push a turbine, and operate steam engines of all kinds. That extra one-degree really matters – it’s a small change but a GIANT difference. And that’s the point of our lesson – the difference between success (in this case boiling water that creates power) and failure (just having a bunch of hot water that lacks power) is so small, but so important. (For more on The 212 Principle, see the Bonus Notes below).

I’m sure you’ve heard of Michael Phelps, right? You know the swimmer who has more gold medals (18) than anyone else in the history of the Olympics? Yeah, that guy. Well, let’s review a few things about him. Just to put things in proper perspective so you can understand Michael’s greatness – he started his Olympic career in 2004 and between then and the 2012 games there were a total of 48 men’s swimming events – Michael competed in 24 finals during that time – and medaled an amazing 22 times! And we’re not just talking about any medal here – 81% of Michael’s medals are gold. None of the next 20 Olympians with the highest medal counts have as good a gold percentage as that. In short the man is simply amazing!

So what’s Michael’s secret? The fact is that you can’t get a record like that from just being lucky. Michael earned that record from dedication, sacrifice, and a lot of blood, sweat, and tears. He understood that it takes every degree of effort in order to win – Phelps was willing to give whatever it took to get to the 212 degrees effort level because he knew it would give him the power to beat his opponents. Remember – the difference between victory and defeat is so very small – sometimes as small as a few seconds, sometimes less than a second, and sometimes less than a 1/100 of a second! It wasn’t by chance that Michael kept winning so many close races – it was because Michael was willing to give that 212 degrees of effort – every time for every race.

Just as importantly Phelps never gave up – even when it appeared to the rest of the world that he was about to lose, Michael kept swimming with all his effort, his 212 degrees of effort. Why? Because even though he didn’t have control over his opponents, Michael knew he did have control over himself and the effort he could put forth; he knew that if he always gave 212 degrees of effort that it would put a lot of pressure on his opponents. Experience had taught Michael that opponents often faltered under intense pressure, so Michael knew he had to always be ready to take advantage of an opening at any time. He knew that sometimes those openings didn’t appear until the end of the race, sometimes not until the last split second! By that time most people NOT in the lead have already given up, but not Michael. He knew he always had a chance because Michael gave his full 212 degrees of effort from the beginning of the race to the very end. And Michael was rewarded for his never-say-die efforts time and time again. (See the Bonus Notes for not 1, not 2, but 7 different times when Phelps snatched victory at the very end!)

What This Wisdom Means to YOU…

The point is this — whatever you want to do, whether you are competing with yourself or someone else, you have to keep pushing through, with all of your effort, to the very end (and beyond) until you get YOUR GOAL. And if you get a lead, don’t let up, don’t ever relax, don’t ever stop until you win – there are way too many examples of individuals and teams who had a lead in something and relaxed too early (thinking they were certain of victory) only to watch their opponent complete a miracle comeback. Don’t let that happen to you – they’ll be time for celebrating AFTER you win, until then give it all you got until the contest is over and complete what you started. At the same time, if you are the one who is behind, don’t give up, keep forging ahead, keep trying, keep up your pressure – your opponent could well be about to crack under the stress and give you an opening – you have to be ready to take advantage of any opportunity like Michael Phelps did so often. Always remember — victory (or defeat) is never final until the contest is over. You can still win even when all looks lost – if you keep trying! To inspire you I ask you to consider the greatness of Michael Phelps in this gold medal race from the 2008 Olympics – a race when he was getting smoked the entire way and it looked absolutely certain that he was going to lose, and yet, somehow, some way he found a way to win again: https://www.youtube.com/watch?v=0KLy-NnTD2o

Don’t Wait, Use This Wisdom Today…

Ask yourself, are you willing to give 212 degrees of effort to create power in your life? Or are you willing to watch your opponent give that kind of effort and beat you instead? The answer is going to determine the difference between victory and defeat. I hope YOU are the one who rises to the occasion!

1) Regarding the temp for boiling water for those of you who are math or science whizzes I know that these numbers may vary if the altitude, atmospheric pressures, etc. change but I think you’ll agree the overall lesson is still the same.

2) There is now a phenomena known as “The 212 Principle” – to learn more about it watch this vid: https://www.youtube.com/watch?v=PDGrbR2MfCo )

3) Check out this link for seven of Phelps’ races in which wins by the smallest of margins: http://www.sbnation.com/london-olympics-2012/2012/8/3/3216672/michael-phelps-swimming-greatest-races-videos

1 thought on “Are You Willing to Give the Effort It Takes to Win?”